Home » Beyond the Marijuana Money: Why Former NFL Players Are Investing in Cannabis

Beyond the Marijuana Money: Why Former NFL Players Are Investing in Cannabis 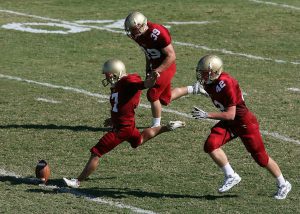 In the last decade or so, CTE has been a popular topic of conversation around the NFL and how it damages the bodies of its players.

At the same time, many people have realized that there’s a lot of money to be made from the kind of relief offered by cannabinoids like CBD. It turns out that CBD is great for the problems connected to CTE, which makes the marijuana money NFL players are investing a smart idea.

Here is how five ex-NFL players are involved in the cannabis industry:

Joe Montana is a smart and savvy all-star NFL quarterback who knows how to make a decision that’ll pay off. After years playing with the 49ers and Kansas City Chiefs, he racked up four super bowl rings due to clever decision making and smart predictions. These days, he’s seeing the value of cannabis for former players, aging athletes, and people who just need the relief.

He’s been an advocate for education on the drug so that the general public can set their expectations. While many people have their own ideas about what cannabis brings to their lives, he wants that feeling to be founded in science and education. Cannabis brought relief to Montana and helped him reach a state of healing and relief after years of pressure on his body.

Now that legalization is picking up steam all over the world, he thinks that information is the answer. He’s not only invested in the plant but also has invested in helping to teach others about the curative properties of the plant.

While he’s found a powerful way to heal himself, he’s ready to share that with others.

The former Jaguar and Chicago Bear knows the power of the plant. Like so many other NFL players, Britton was a top-notch competitor who spends his formative years pushing to the edge of what his body could do. Eben realized by the end of his career that his time in the NFL had taken a toll on him.

One thing that investing in marijuana has done is to help support something that he’s found some healing relief in. With all of the anxiety and stress caused by performance and the pain that comes after, cannabis was a big help. In that high-stakes and highly-competitive environment, he could handle the stress of being injured with the help of cannabis.

Unable to compete after a while because of pain, cannabis helped him with a career plagued with injuries. However, all of that pain was no match for relief from marijuana. Now he’s putting his money where his mouth is and investing in cannabis.

3. Ricky Williams Can Tell You

No stranger to alternative medicine, Ricky Williams, formerly of the Saints and Dolphins, has invested in marijuana. Traditional medicine is meant to ease your pain without always treating the source of the symptoms. Williams knows that by supplementing yoga and acupuncture with cannabis, the best effects of both are able to come out.

There are so many players who use cannabis but have wanted to avoid the stigmas and stereotypes of using it. However, by talking about it out in the open Williams wants other players to be honest about their use. When everyone feels comfortable talking about it, he knows that the culture around it will improve.

In the meantime, he’s investing in the industry to make sure that it’s there when other players need it. He wants other players to come out of hiding in the closet where it’s unacceptable to talk about the drug and to be open about the ways that it helps them.

4. Talk to a Super Bowl Champ

Leonard Marshall knows about winning games and staying competitive. He’s a two-time Super Bowl champion who tried cannabis in college but put it aside to compete. He always planned to return to the cannabis plant in his later years and has now that he’s gotten older, he has.

Playing in the NFL was a great joy for him, but like many other players, it took a serious toll on his body. In recent years, from the advisement of Ryan Kingsbury, Marshall was reintroduced to the plant. The pain, short-term memory issues, and light sensitivity that came with playing have all been relieved.

Thanks to cannabis and CBD specifically, Marshall sees the value in the plant. He’s become invested in the relationship between CTE and CBD. As someone who has been an outspoken proponent for research in both, he’s been deeply respected by people on all sides of the conversation.

Even though it took him years to get around the understanding of how CBD and cannabis could help him, he’s an advocate who is working to spread the word.

5. Bronco Marvin Washington Is a Fan

Denver Broncos Super Bowl champion Marvin Washington knows a lot about winning. He also knows to be on the winning side of the argument about the positive impacts of cannabis. That’s why he’s been featured as a guest speaker at cannabis expos all around the globe.

He’s an advocate of cannabis as an alternative to traditional pharmaceuticals to deal with pain and take down inflammation. While there have been so many people who’ve demonized the drug throughout the 20th century, he’s at the forefront of reinventing the plant. With advocacy and investment, he knows that there’s a future in cannabis that’s important to all kinds of people, with athletes standing to gain the most.

Marijuana Is Out There to Help

More NFL players than ever before are speaking openly about the marijuana and how it helps former NFL players. Thanks to the research being done into its curative properties, there are more ways than ever to get relief from the drug. NFL players are investing in their futures as well as the ability for other players to get relief.

If you’re looking to make your own money in the cannabis industry, check out our guide on how to make some cash.